Flying the Husky to Victoria

I have obtained permanent residence in Canada this year, and now live in Edmonton. One of the logistical issues was to ship my Husky aircraft to Canada - a few simple words, but a very daunting task, in hindsight. I shipped the Husky in February and was told that it would arrive ten weeks later in San Francisco, from where I would fly it to Canada - a very daunting task, but very simple in hindsight.


A Husky is a new generation fabrication of the age old Piper Super Cub - not that it really went from a lion to a dog; the reverse is more true. A Husky is a sled dog used in the arctic regions, and this aircraft has taken its name due to the aircraft's ability to negotiate rough terrain, ice and wilderness flying quite easily. It is a two-seater aircraft with tandem seats as shown on the photo. 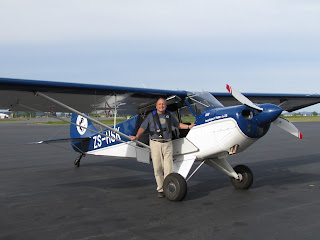 This photo was taken shortly after I landed at Victoria International Airport on Vancouver Island. I still have the life jacket on, a prerequisite for flying over the sea.


I asked my daughter to transfer the money for assembling the aircraft from South Africa to the USA, based on an invoice I received from the USA Company who assembled it in Vacaville, USA. After more than two weeks, when the money was not transferred yet, she enquired as to the delay. The SA Reserve Bank told her that it was too much money to pay for a dog, and what is more, they said, was that dogs come out already assembled.
The day came nearer and I booked one way air tickets for my wife and I to travel to San Francisco, and she was going to fly with me from San Francisco to Victoria in the Husky - a thing I knew she might not go through with. As soon as I start talking about weather and mountains and customs she normally starts to think about other things which may be more fun and safer. But I let it go and know that ultimately I will have to fly the Husky alone - a thing I like very much.
On leaving Canada, I am told by my daughter here that I am looking for trouble leaving Canada on a one way ticket to the USA. The USA customs will immediately pounce on such an infiltration and gross threat to their country, raising the national security level to a Red Alert. I am confident that I can coax the official into believing that I am going on a holiday, as he does not see my air ticket, but only my boarding pass. My wife is always ready to impart too much information to customs officials on such occasions - and mostly incorrect information, so I let her swear that she will not talk to them and leave it to me to provide too little information. I have grown used to the brutality of USA customs officials over the years, and have learned to say the things which they want to hear. It turned out that this USA customs official was very much impressed with my holiday visit to their beautiful country. The mode of return to Canada I naturally left out.
It is quite amusing to me that when I applied for the USA visa I had to prove that I had enough money to visit the USA - something like producing a bank letter that I have $100 000 available for my week stay there. However, when you enter the country you must plead poverty and say you are not bringing in any money; for fear that you might upset their trade balance. I know they will not phone my bank manager and ascertain how much money I have available in my debit and credit cards, so I take the chance of pleading poverty.
I take these things in my stride, but my wife always gets uptight about these. She regards sitting in jail for a few nights a shame that must not be allowed to come over her family. I take it like the South African idiom, which, translated, says: Worse than chopping off my head it cannot be.
And so the day before I fly the Husky to Victoria arrives, and I have to check its systems and take it for a test flight to ascertain that it was assembled correctly. I have many hitches like a flat battery, an outdated North American database for the GPS and other such trivial setbacks. When I take it for a test flight I discover that the cables of the control surfaces (ailerons) are too tight, making it very difficult to control the aircraft properly - a task normally as easy as steering a ballerina in the right direction. The test flight landing left me jumping all over the runway, losing control now and then, and waiting for the aircraft to land itself as its sees fit.
I get Scott to release the tension on the control cables to the minimum specification and all is ready. I just need to talk to someone about the USA Air Traffic Control System.
Seven years earlier ….
I take delivery of this self-same Husky at the Factory in Afton, Wyoming and have to fly it to Minneapolis, Minnesota (see article elsewhere). Mark, the factory pilot, introduces me to the USA Air Traffic System in three and a half minutes on these lines: You talk to nobody. Just fly and look out for other aircraft. If you have trouble, just talk to Flight Watch on this frequency. Here is an old chart - take this route (drawn in rough with a highlighter) over the Rockies, and watch out - the weather is bad today - thunderstorms all the way - here are the webcams - you can see how bad it looks - so off you are! 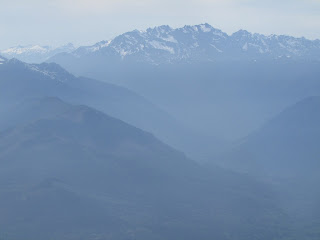 Mount Olympus
It is interesting to note that Mount Olympus is responsible for the good weather normally experienced in Victoria, being in the rain shadow of this mountain range. Tofino, which is situated on the west coast of Vancouver Island, has a mean annual precipitation of 3300mm, while Victoria only about 300km away from it on the eastern side of the island, has a mean annual precipitation of only 600mm. That is why the coast on the mainland west of Vancouver is called the Sunshine Coast.
On reaching ARPEE I turn left to cross the sea strait which is 40 km wide and will take me twenty minutes to cross. For this purpose I have bought a life jacket. Should I make a forced landing in the sea, and get knocked out, then this life jacket will inflate automatically. 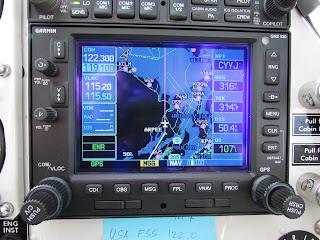 Same area as picture below 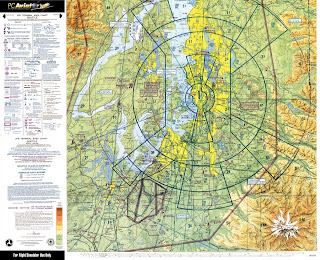 Seattle Flight Control Areas
From here I can see the island, although it is quite hazy still, due to the fog. I can see the remains of the fog to my right side hanging over the sea. 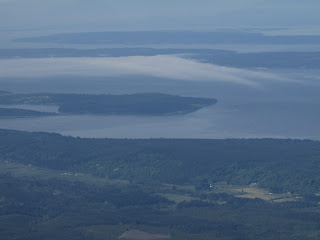 Halfway over this sea strait, I make contact with Victoria Approach, after listening to information Mike on their ATIS.


later …
Victoria: Hotel Sierra Kilo, Do you have the airport in sight?
Husky:   Airport in sight affirmative.
Victoria: Turn onto a heading of 300 degrees, descend to 2000 feet and call me once you cross the coast outbound for left base onto runway 09.
Husky:   Descend to 2000 feet and call you the coast outbound next, Hotel Sierra Kilo.


later …
Victoria: Hotel Sierra Kilo, do you mind if I bring the King Air on wide left base in before you?
Husky:   No problem, I will peel off to the left and follow it in.
Victoria: Contact Tower now on one one eight one. Have a good day.
Husky:   Tower on one one eight one. Thanks and good bye sir.
What a pleasure to talk to a professional controller - and one who is so friendly and human. I am getting respect for this type of service.
After landing, Ground Control clears me to taxi to customs, and I know - here it comes - as I park in front of customs. I expect some three to four customs officials with machine guns storming out of the customs office and shouting at me to SIT STILL AND DO NOT MOVE - but nothing happens.
I feel neglected, as I recall my encounter with USA officials in a similar situation when I entered the USA from Canada seven years ago at Sanderson Field near St. Sault Marie. Here is an abstract of that skirmish from a previous article:
The second incident was in northern Michigan just south of Sault Saint Marie (pronounced Saw say Marie). We received and instruction via Air Traffic Control that we must land at this very small airfield just over the border from S.S.Marie - they gave us the airfield code - so that we can go through customs. When we taxied up to the terminal building we saw two armed customs officials charging out of the building and yelling and waving at us - even before we came to a standstill. It looked to me as if they were intent on inflicting serious bodily harm on us. Pieter on the other hand thought that it would be better to stop at the refuelling bay, so that we do not have to start up again when we refill the aircraft. I shouted to Pieter to stop immediately, fearing that if he did not stop immediately, they would start shooting at us if we parked in the wrong position; similar to the policeman of Beki Cele shooting a white woman for parking incorrectly at the police station (see my previous blog).
As they came nearer to the aircraft they shouted :
STOP !!!! ... and then ... SIT STILL !!!.
We were frozen in situ and I wondered whether I may blink my eyelids, when they yelled  that I should open the aircraft door.
WHERE ARE YOU FROM ???? from the arctic sir.
WHERE ARE YOU GOING TO ??? to south africa sir.
That was too much for them - who were we to poke fun at them. So it is interrogation and searching our bags over and over - finding nothing. It then dawned upon them that maybe, just maybe, we were telling the truth, as in fact we were.
I can see that with every word I spoke, which was the whole truth and nothing but the truth, they get more and more agitated, as if they have just heard the biggest lies ever.
After telling them of our adventure, one of them got very friendly and at one stage I thought he was going to give us the freedom of the United States or at least of some Big City in it. The other however was adamant not to be caught off-guard and remained inhuman.
I do not think I was ever as near to extradition to a faraway place as that day.


At the Customs office I am told to phone Customs as I have arrived after hours. I talk to a (real) lady at Customs main office and she asks me whether I have anything more to declare, to which I answer: No. She said that they will not come out to search me, that I can go and she gives me a clearance/entry reference number. I find out that Canadian Customs officials are actually human beings, and that they treat people like humans. So good to be Home.
It has taken me almost seven hours to reach Victoria and when writing in the aircraft log book after the flight, I note as well that this must have been one of the most enjoyable flights I have ever made.
Posted by Peekay

Adult Sunday School – Part 25 - Oh, my Son, my Son The most traumatic moment in the life of God was when His son died. Some of us who h...

Flavour of the month

RSS feed The Stuff Reality is made of